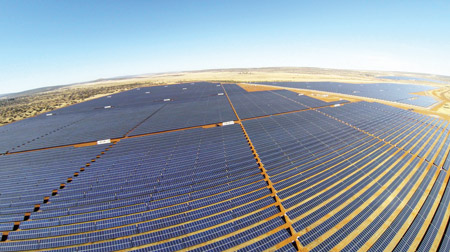 Southern Africa‘s problems with power – or the lack of it – are well documented.

This means that almost 600 million people in sub-Saharan Africa lack access to electricity. Only seven countries – Cameroon, Côte d’Ivoire, Gabon, Ghana, Namibia, Senegal and South Africa – have electricity access rates exceeding 50 per cent. For the rest of the region, the average grid access is just 20 per cent. Yet such a low starting base of electricity offers huge potential – and that potential is well on the way to being realized.

A recent report from analysts at McKinsey & Company, called Brighter Africa, states that “we are starting to see significant momentum in power across the continent”.

“Governments are becoming more sophisticated and increasingly opening up to private-sector and foreign investment. Monumental gas discoveries in East Africa between 2010 and 2012 have attracted investment and increased fuel-supply options for power generation,” the report said.

“The United Nations’ Sustainable Energy for All initiative has attracted more than $120 billion in commitments for the sector in Africa. Most recently, in 2013, the United States announced its Power Africa initiative, underscoring the importance of the opportunity.”

McKinsey states that the power sector in sub-Saharan Africa “offers a unique combination of transformative potential and attractive investment opportunity”.

The report forecasts that sub-Saharan Africa will consume nearly 1600 TWh by 2040 – four times the region’s consumption in 2010.

This projection is driven by a five-fold increase in GDP, a doubling of population, electricity access levels reaching more than 70 per cent by 2040, and increased urbanization.

According to the report, by 2040 sub-Saharan Africa “will consume as much electricity as India and Latin America combined did in 2010”. In terms of supply, it says that sub-Saharan Africa is “incredibly rich in potential power-generation capacity”.

It estimates that there is potential for about 400 GW of gas-fired power, with Mozambique, Nigeria, and Tanzania representing 60 per cent of the total capacity; about 350 GW of hydropower, with the Democratic Republic of the Congo accounting for half of this; around 300 GW of coal capacity, with Botswana, Mozambique, and South Africa representing 95 per cent of this capacity; 109 GW of windpower and 15 GW of geothermal.

And as for solar, McKinsey says there is “nearly unlimited potential”.

Gas would account for more than 40 per cent of the electricity generated from 2020 onward, with hydro remaining a very important technology. Solar would take off significantly after 2030, representing 8 per cent of the generation mix by 2040 and more than 30 per cent of capacity additions between 2030 and 2040.

McKinsey forecasts that even in the absence of active incentives, more than 25 per cent of total energy in 2040 would come from geothermal, hydro, solar and wind, compared with 21 per cent of today’s power mix, which almost all comes from hydroelectric.

The report predicts that Southern Africa will continue to build coal capacity, but its overall importance in the continent’s fuel mix will diminish from 51 to 23 per cent.

However, Steve Mandel, vice-president of global energy and resources at private equity giant Denham Capital, says coal-fired power makes sense in certain regions of Africa and should not be discarded as a solution to meeting growing demand for power on the continent.

He says, in terms of solutions for various African countries, “the alternative is often diesel. This is dangerous to humanity and the environment. Methane emissions are similarly not good. Not all Africa should have coal, but coal is often the best solution for a particular country. In certain regions coal makes sense.”

Mandel adds that, despite the rhetoric advocating a global move away from coal-fired power, in the US and UK 50 per cent of power generation still originates from coal.

“By 2040 that figure will still be 40 per cent,” he noted. “Coal as a solution should be coupled with renewables. It’s not a perfect solution but it shouldn’t be struck off the list.”

Mandel also says that the development of renewables is particularly suited to African countries.

“In Africa it makes sense. The wind blows more and the sun shines more – and the cost of solar panels has come down 85 per cent. Renewables are a cost-effective option in Africa. A solar plant can be built in six to 13 months without the same grid constraint. Smart grid and distributed generation will be key to what is a large rural continent.”

In more urban areas where larger-scale power plants are required, Mandel said that the roadblock represented by poor infrastructure needed to be tackled from the top down.

“Developers are ready to build, but the framework is not in place,” he said.

McKinsey states that “if every country builds what it needs, we estimate that the region would require about $490 billion of capital for new generating capacity, plus another $345 billion for transmission and distribution”.

Its report states that regional integration, such as power pools, and promotion of renewable generation are “game changers that could shape the energy landscape in sub-Saharan Africa over the next 25 years”.

McKinsey found that “significantly increasing regional integration could save more than $40 billion in capital spending, and save the African consumer nearly $10 billion per year by 2040, as the levelized cost of energy falls from $70 MW/h to $64 MW/h”.

“Higher levels of integration would result in larger regional gas options being favoured over some of the smaller in-country solar and wind additions, leading to an increase in carbon emissions.”

McKinsey says that if sub-Saharan Africa “aggressively promotes renewables, it could obtain a 27 per cent reduction in CO2 emissions; this would result in a 35 per cent higher installed capacity base and 31 per cent higher capital spending (or an additional $153 billion)”.

The Brighter Africa report says that to move ahead on development of the power sector, national governments should take the initiative in several areas.

“For one, they could focus on ensuring the financial viability of the power sector. Four points matter here: electricity tariffs should reflect the true cost of electricity, costs should be transparent, the country should make the most of what it already has in the sector, and officials should pursue least-cost options in investments.

“A second imperative involves creating an environment that will attract a broad range of funding mechanisms. Private-sector involvement is critical and central to effectively delivering new capacity. To attract the private sector, it is necessary to provide clear, consistent regulations; allocate risks to the parties best suited to carry them; ensure that a credible buyer (off-taker) exists; and seek support from external institutions to guarantee the risks.

“Last, it is important for governments to demonstrate political will. To do this, they can prioritize efforts, keep an eye on the long term, and focus on the regulations and capabilities needed for the sector to thrive, not just on the plants and associated infrastructure.”

The report also stresses that China is investing significantly in Africa. Its direct investment has jumped from $56 million in 1996 to $1.5 billion in 2005. By 2011 it was $15 billion and about 65 per cent of this is in sub-Saharan Africa, of which just over a third went to the energy sector.

Most of this is solar potential, which can deliver about 11 TW. The balance of 1.2 TW of power-generation potential is located across a broad range of countries and excludes biomass, nuclear, or any energy imports.

McKinsey says that, using a conservative estimate, 0.02 to 0.05 per cent of landmass can be covered by solar panels, and sub-Saharan Africa should be able to deliver 11.4 TW of solar capacity.

This is dominated by the large and desert countries, with the top five – Chad, DRC, Mali, Niger and Sudan – holding about 40 per cent of the potential capacity.

However, it is more conservative in its expectations for the additional costs of project delivery in Africa.

“As a result of this additional premium, we effectively see total overnight capital for solar PV decline from $2500 to $870 per kW over a 30-year period.

By 2030, solar would be the cheapest or second-cheapest domestic energy source in more than half of sub-Saharan African countries.

In terms of coal resources, McKinsey estimates that the capacity is at about 290 GW. South Africa (114 GW), Botswana (107 GW) and Mozambique (57 GW) comprise 94 per cent of this capacity.

In 2020, McKinsey says the levelized costs for these big three markets will range from $59 per MW/h hour to $71 per MW/h.

These costs will remain stable over the following two decades, given anticipated increases in mining cost and diminishing quality of coal, but offset by improved power station thermal efficiency.

Other countries, which together represent 6 per cent of the total available coal market, will see higher costs, driven by lower calorific value of the coal and larger mining expense. The 2020 levelized costs range from $73 per MW/h to $86 per MW/h. McKinsey expects these these figures will improve slightly, to $62 per MW/h to $73 per MW/h by 2040, as a result of thermal efficiency improvements in power stations.

As for onshore wind, McKinsey states that it could deliver about 109 GW of capacity. The report says that onshore wind capacity “has made big strides in Africa. Wind potential is found in most coastal African countries. As a result, the top five countries – Angola, Chad, Somalia, South Africa and Sudan – represent just 66 per cent of the opportunity.

McKinsey concludes by stating that, for sub-Saharan Africa’s power sector, “the time is right for action” and “there is real momentum for change”.

“The countries of sub-Saharan Africa aspire to grow their economies and many people are frustrated by the lack of power. There is now enough support, international attention, and focus to enable this growth.” And if power sector development happens, the report said, it will lead to “a true economic breakthrough”.