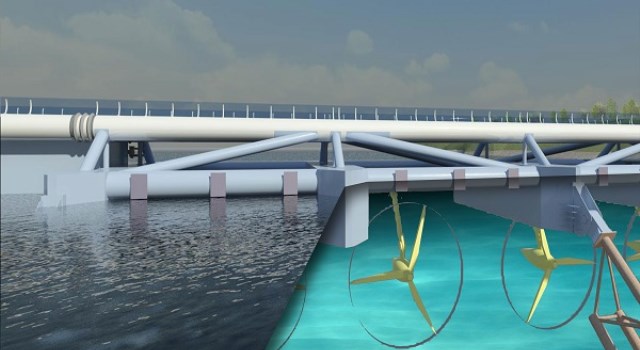 The Indonesian government has approved plans for a large scale tidal power plant, as the country looks to alternative energy sources to power its growing demand.

There is some concern about potential damage to the ecology of the island of Flores, earmarked for the project, however the site’s developers say this will be limited.
The new plant, known as the Palmerah Tidal Bridge, will be built into a floating 800 metre-long bridge on the Larantuka Strait in East Flores, and promises to deliver power capacity of 18 to 23 MW, providing enough electricity for 100,000 people in the area. It is the first deal to emerge from a strategic hydropower alliance between Indonesian and Dutch governments.

A second phase of construction could see capacity increased to 90 to 115 MW, enough power for more than half a million Indonesians in a region that largely relies on polluting diesel generators for electricity.

Indonesia is an ideal location for tidal power, because of strong ocean currents that move between the world’s largest archipelago’s thousands of islands.

Around 50 million Indonesians are without reliable electricity, and president Joko Widowo’s 35,000 MW plan to electrify the country is slated to use mostly coal (20,000 MW, or 57 per cent) to deliver power to those without it.

Eric van den Eijnden, chief executive officer, Tidal Bridge, told Eco-Business that research had been done to assess the environmental impact of the bridge on biodiversity in the area, and that the consequences would be “very limited”.