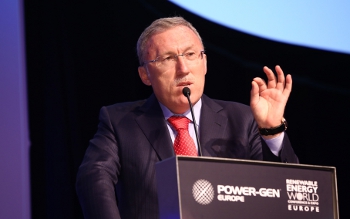 Here is an outline of some of the issues facing the global energy industry and how they will be addressed at theà‚ 23rd World Energy Congress in Istanbulà‚  in mid-October.

COP21 in December 2015 has identified an ambitious set of goals which were agreed by nearly 200 countries. The headline target to put the brakes on global warming so the earth does not heat up by more than two degrees requires business and government to work hand in hand.à‚

Policy makers must enshrine these targets in law and ensure that the appropriate incentives and funding are available to help businesses adapt.

As it currently stands, 41 per cent of global CO2 emissions are produced by the energy sector, followed by transport with 23 per cent. Many countries are working towards decarbonising energy supply with more environmentally friendly means of energy production. For example, in 2015, President Obama announced a target of 20 per cent non-hydro renewables for the US by 2030 and the UAE has pledged to drop fossil fuel subsidies and increase the low-carbon energy contribution of renewable energy and nuclear power to 24% of the overall energy mix by 2021.

It is critical for the global economy that these businesses adapt; such is the importance of the energy industry that if companies don’t innovate and adapt, the future of the planet is at risk.

At the World Energy Congress, this will be addressed in a number of sessions including ‘Scenarios 2016: the Grand Transition’ which will explore the latest scenarios and modelling developed by the World Energy Council.à‚  Led by Isabelle Kocher, CEO of Engie, Guler Sabanci, Sabanci Holding Chairman, and Steve Bolze, President and CEO of GE, this session will explore the scenarios (Modern Jazz, Grand Symphony and Global Blues) developed by the Council and explore questions such as What are the major challenges that the world and its energy sector will face on the pathways to 2060? Which will be the most critical innovation areas? What does the future energy industry look like? Who wins and who loses?

It is on the issue of energy transition that we have received the majority of our award-winning academic papers.à‚  Academic papers are a bastion of the World Energy Congress, enabling industry leaders and innovative thinkers to present their findings and proposals to a high-level global audience.à‚  Awarded papers include Yousef M. Alshammari and Mani Sarathy’s ‘Achieving 80% Greenhouse Gas Reduction Target in Saudi Arabia under Low and Medium Oil Prices’ and Sergey Paltsev’s ‘Projecting Energy and Climate for the 21st Century: Energy Scenarios, Energy Geopolitics, and Impacts of the Paris Agreement (COP-21)’.

Whilst more people than ever have access to energy, the question of long-term affordability remains less certain. Access to, and the affordability of energy are key development issues, and recently incorporated into the UN Sustainable Development Goals. At the Congress we will look at real solutions to address these issues on day one, in the ‘Scenarios for the Future’ sessions and also on day three in the ‘Embracing the Trilemma’ sessions. The session on Latin America and its energy transition, for instance, will call on regional leaders such as Olga Otegui (National Energy Director, Government of Uruguay) to discuss how countries balance access with affordability.

Access and affordability problems are not only concerns for developing countries. In developed nations consumers often feel the pinch of rising energy costs. In many countries ambitious renewable energy programmes are financed by increased consumer prices, with some policy makers claiming that higher energy bill prices will be balanced by lower consumption.

Affordability is also a key concern with regard to the rise of renewable energy. In the 2015 Energy Trilemma Index, the flagship energy metric from the World Energy Council, the US, Canada and Saudi Arabia respectively ranked 1st, 2nd and 51st for energy equity, and yet ranked 95th, 71st and 120th for environmental sustainability.

Countries need to stay true to their commitment of transitioning to a low-carbon energy supply without succumbing to a knee-jerk reliance on energy subsidies, which can be a pretty blunt instrument, too often meaning that costs fall upon both governments and consumers.

On these issues, we have Shruti Sehgal’s awarded paper on ‘Innovative Pricing Models for Sustained Growth of the Solar Power Sector,’ which will be presented at the Congress.

Africa is the chief example of a developing continent impacted by the way in which energy intersects the poverty and climate change debate.à‚  As such, Africa will be a special focus for the 23rd World Energy Congress with a whole day at the event dedicated to questions surrounding the continent’s energy future. The fourth day of the Congress will see an impressive gathering of African energy leaders, discussing methods to secure a sustainable energy future for Africa.

Africa represents a phenomenal investment opportunity but also many risks. It is vital that this continent, so rich in potential, is given the opportunity to rewrite its energy plan to ensure that its countries tackle the challenges associated with climate change. Africa’s energy challenge is acute; 600 million people do not have access to modern energy, and in South Africa alone, blackouts cost businesses in excess of $7.2 billion every month in lost production, revenue, and wastage.

This additional focus on Africa is something I personally pushed for in planning the Congress.à‚  I firmly believe that it is vital for global energy leaders to now give due attention to the world’s largest investment and development opportunity.

This is only a short overview of the topics, papers and speakers who will be appearing at the Congress.à‚  The calibre of speakers and diversity of academic submissions, together with the insight which our Future Energy Leaders will bring, all make for a fantastic event. Mindful of the security concerns, the World Energy Congress has appointed the Soufan Group to manage the event security.à‚  We look forward to you joining us in Istanbul on 9th October.